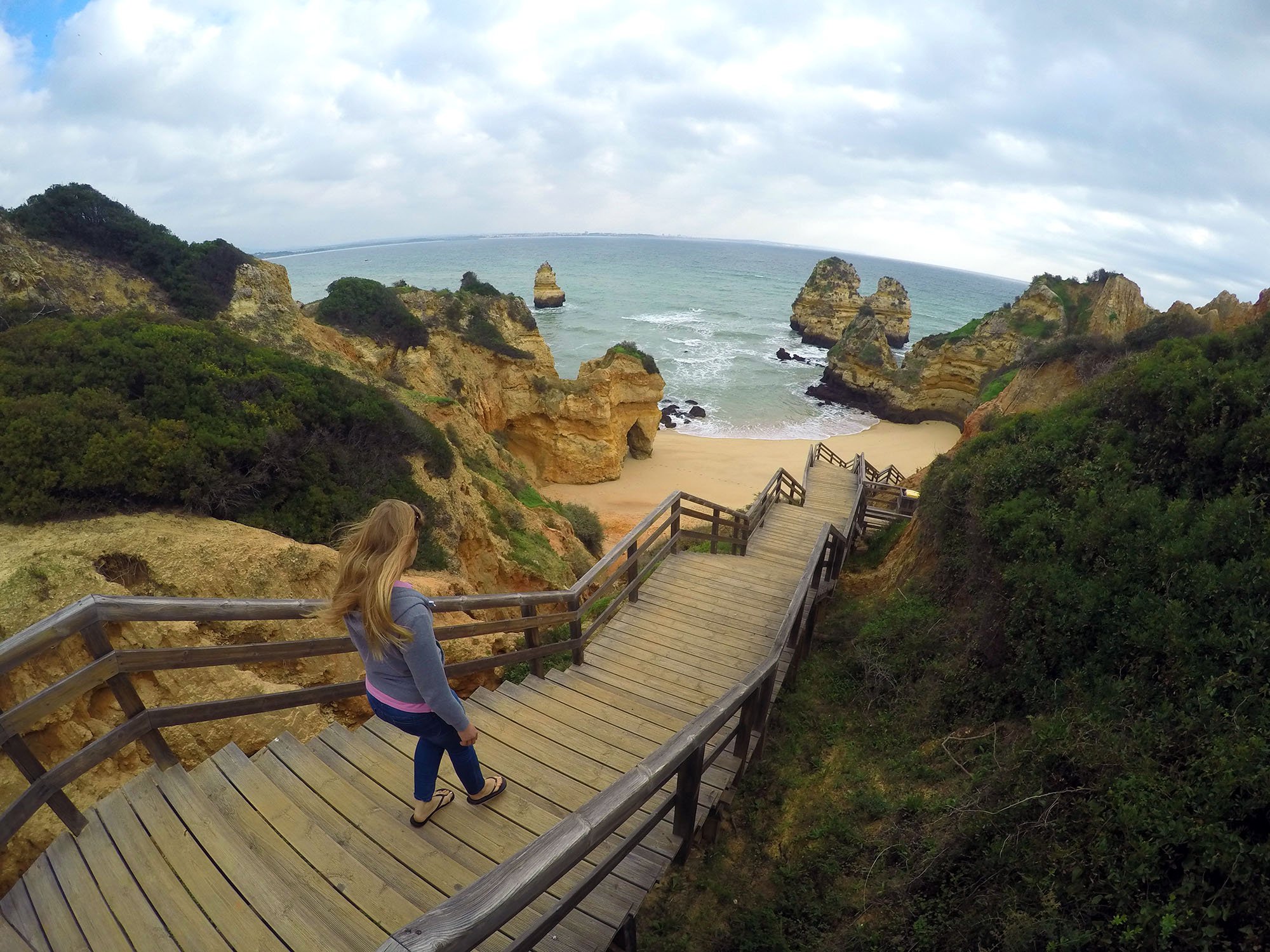 Portugal…Lagos to be exact.    I was lucky enough to fit in a quick trip to Portugal this November.  Starting off in Faro it took us just over an hour to drive to Lagos.  At this time of year everything is so cheap.  The flights, the car hire and even the accommodation!  Surprisingly the weather in November means it’s still shorts and t-shirt wear, with the  exception of the evenings.    Lagos itself is a maze of streets and restaurants that would be best navigated on a donkey, with an Americano, a lot of patience and a large map.

We stayed very close to the beaches towards the tip of  Ponta da Piedade.   As you can see the scenery is pretty amazing!  Loaded with the Gopro, we visited several stunning coastal locations.     The title picture is Camilo beach.  Words dont express the raw nature and total serenity of it.  The sand was like thick sugar between your toes and with a cave around every corner there was lots to explore.

Ponta da Piedade itself must be one of the most beautiful natural features in the Algarve.    The cliffs have obviously been eroded for decades forming spectacular rock pillars, grottos and caves.  The sea is a stark turquoise and a complete contrast to the sandy cliffs.    The first day I visited, the sea was too rough and dangerous for snorkelling.    The tide was almost fully out and the waves were smashing against the rocks which wasn’t how we’d planned it!    It was, however, perfect for a group photo!

We drove to Sagres on the far west coast and went surfing for the afternoon.     Wetsuit, board, leash for a half day €15.00.  Bargain of the holiday!   As we drove to try and find the exact beach, we ended up passing it by, but then managed to stumble across it from the cliffs above.   A surfers paradise.  The waves rolled in perfect lines towards the beach.  With such a fantastic view point, we stood and watched a body boarder just make it out the other side of a barrel.   “Get me to the beach”!

Ill never forget the walk down to the beach.  The sun was warm and lit up the beach in a yellow hue.     I couldn’t believe the water temperature.  It was almost too warm for a full suit!  (Yes, I’m Irish)   Multiple decent attempts were made at catching a wave but they were BIG and the current was pretty strong.  Yikes!

Thankfully, on the last day, the winds had dropped off and the snorkelling trip at Ponda da Piedade was a go!    Beware of the tour buses!  The steps down to the caves are steep and narrow, with one tour bus it becomes a little too crowded!    Since it was so calm, the local tourism board had jumped into action with a pop up bilboard advertising tours of the caves.   You can do that…. or you can just jump in, swim around and have a look for yourself, which is what we did.

I wont lie.  At first the water was positively baltic!  I cheated a little with a 2mm summer suit.    Once we got in it actually wasn’t too bad!   Robyn and Alan we wetsuit-less, so we did eventually get cold after the two hours.    We swam out of the cove and over to the furthest rock pillar.    We ventured up the rocks and into a cave where I managed to catch this photo with the awesome Gopro.   The sun was making the water glisten and the light was perfect.   Although the exact conversation at the time was… “I cut my myself on the reef, Its bleeding pretty badly….Do you think there are sharks here??”   We were satisfied with Alan’s manly grunt for an answer and headed back across to the cove.

I loved our 3 day trip.  From what I’ve seen of it, Portugal is stunning.   I will certainly spend more time here in the future.   Something tells me we came at the right time of year.  I just couldn’t imagine this place packed full of tourists with kayaks, boats and snorkelers everywhere.  We had the place to ourselves, which made it even more memorable!